he university is located in Irving, Texas on a 744-acre (301 hectare) campus in the Dallas–Fort Worth metroplex.[11] The Las Colinas development is nearby. It is 10 miles (16 km) from downtown Dallas. The campus consists mostly of mid-century modernist, earth-toned brick buildings set amidst the native Texas landscape. Several of these buildings were designed by the well-known Texas architect O’Neil Ford (dubbed the Godfather of Texas modernism).[48][49] The mall is the center of campus, with the 187.5 feet-tall (57.15 meters) Braniff Memorial Tower as its focal point.

SB Hall on the University of Dallas campus, seen with the Braniff Tower in the background 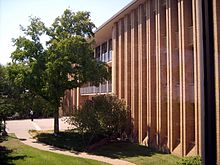 Perhaps reflecting prevailing biases against mid-century modern architecture, the Princeton Review once mentioned the University of Dallas as having the fourth-least beautiful campus among the America’s top colleges and universities, along with several other campuses with abundant modern architecture.[50] Travel + Leisure‘s October 2013 issue lists it as one of America’s ugliest college campuses, citing its “low-profile, boxy architecture that bears uncanny resemblance to a public car park,” but noting that a recent $12 million donation from alumni Satish and Yasmin Gupta would bring new campus construction.[51]

The campus is home to the Orpheion Theatre, a small Greek-style playing space built into a hillside. The theatre was constructed in 2003, and has since been used for a handful of mainstage and student productions.