Lancaster University (legally The University of Lancaster) is a collegiate public research university in Lancaster, Lancashire, England. The university was established by royal charter in 1964, one of several new universities created in the 1960s.

The university was initially based in St Leonard’s Gate in the city centre, before starting a move in 1967 to a purpose-built 300 acres (120 ha) campus at Bailrigg, 4 km (2.5 mi) to the south. The campus buildings are arranged around a central walkway known as the Spine, which is connected to a central plaza, named Alexandra Square in honour of its first chancellor, Princess Alexandra.

Lancaster is a residential collegiate university; the colleges are weakly autonomous. The eight undergraduate colleges are named after places in the historic county of Lancashire, and each have their own campus residence blocks, common rooms, administration staff, and bars.

Lancaster is ranked in the top thirteen in all three national league tables, and received a Gold rating in the Government’s inaugural (2017) Teaching Excellence Framework. The annual income of the institution for 2018/19 was £317.9 million of which £42.0 million was from research grants and contracts, with an expenditure of £352.7 million.[1] Along with the universities of Durham, Leeds, Liverpool, Manchester, Newcastle, Sheffield and York, Lancaster is a member of the N8 Group of research universities. Elizabeth II, Duke of Lancaster, is the visitor of the university. The current chancellor is Alan Milburn, since 2015. 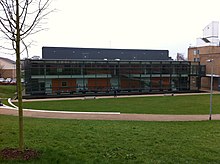 The university is divided into four faculties. Each faculty is led by a Dean, and each academic department by a Head of department.

The various administrative and technical departments that exist outside of the four faculties are collectively known as Professional Services, and include Facilities, Admissions, and the Library.